Kibbeh is a quintessential recipe from the Middle East. This version is a Lebanese Kibbeh, a vegetarian kibbeh, made with potato and bulgur on an aromatic bed of walnuts, onion and sultanas.

Kibbeh is one of Lebanon’s national dishes and comes in many forms, using a base ingredient of bulgur;

Kibbeh is mostly made with ground meat such as lamb which is incorporated into the bulgur and stuffing, however there are many versions of vegan or vegetarian kibbeh too. Such as this one.

This version of Lebanese kibbeh is from Tripoli.

This is a well balanced sweet and savoury kibbeh, which we normally eat with a salad such as Quinoa Tabouli or fattoush salad and a side soup of Lebanese Lentil Soup (Shorbet Adas) one of my top two favourite soups.

I know of some people who love to eat kibbeh with tarator. A versatile tahini sauce also known as falafel sauce.

Kibbeh bi zbeeb can be made without the sultanas too. I make both versions when I make this kibbeh as my son and husband don’t like sultanas in their savoury foods. The result is still wonderful.

The taste of kibbeh is addictive. The Lebanese seven spice* and use of fresh basil/thyme adds a lot of depth,  the texture is a smooth granular slice.

Making this Lebanese kibbeh recipe is one of the quick versions of kibbeh. It's also great for Easter and Ramadan Iftar.

How to make kibbeh

Soak 2 cups of fine bulgur in cold water for at least 30min. The depth of the water should be at least 1cm above the bulgur.

Squeeze out excess water from bulgur using your hands. You can also use a muslin cloth if this is easier.

In a large bowl, transfer contents from the food processor and use your hands to additionally combine all ingredients, this will help you feel if there are any lumps and to ensure everything is well combined and smooth.

Oil baking tray and add 375g sliced onion, chopped walnuts, sultanas, pomegranate molasses and olive oil. Use your hands to tenderise (by squishing content together) and combine contents. Once all combined, flatten into the tray. This will form the bottom layer.

Add top bulgur layer using your hands. Flatten and smooth top layer onto bottom layer. Use wet hands to help the bulgur not stick to them.

Cover top layer with olive oil, pat it down.

Bake in preheated oven of 180C (356F) for about 55 minutes or until browned and not soft. Cut with a sharp knife into desired sized pieces.

Lebanese kibbeh batter should be completely smooth and contain no chunks of potato. Using your hands will help you feel the dough to achieve this

The end result of this vegetarian kibbeh should brown, and when cut, should not be soft. The cut pieces should hold well together and be eaten like a slice. If it is still soft, it will need to be baked for longer.

Serve this kibbeh with my Lebanese Rocca Salad. It's a simple salad made with arugula as the main leafy green.

Gluten free kibbeh can be achieved. Simply replace the bulgur with quinoa. Always thoroughly wash quinoa before using to rid the bitterness taste

If making gluten free kibbeh with quinoa, add more olive oil to avoid it being dry

If you prefer not to have sultanas in your kibbeh, simply omit this and add a little more onion and walnuts

The bottom layer can also be completely omitted and the top layer can be baked on its own as a singular layer. This is called Kibbet Batata - Potato kibbeh.

As the potato bulgur mix is already cooked, this can be also be served cold (see pic below). Simply flatten it (top layer filling only) into a serving plate and drench in EVOO to serve. This is great as part of a mezzo and eaten with Lebanese bread

Cooking vegetarian kibbeh will take approximately 55 minutes or until brown and is not longer soft.

How to pronounce Kibbeh

Kibbeh is an easy word to sound out and say. It contains two syllables “kib-beh”. Kibbeh is also known as kibbi, kibba, kibbie or kuba - depending on where in the Middle-East you are.

Which bulgur to use in kibbeh

The best bulgur to use in kibbeh is fine bulgur. This will ensure the kibbeh dough is malleable, whether you are using it for making kibbeh bil sanieh, kibbeh balls, or kibbeh footballs (stuffed kibbeh)

Can you make kibbeh with quinoa?

Yes. I have made this previously and it turned out fine. Adjustment to the fats used will need to be factored in to ensure the quinoa kibbeh is not dry.

You might also be interested in this delicious vegan Lebanese recipe of Bulgur Pilav or these soft Lebanese Spinach Pies.

Did you enjoy making this avocado banana smoothie recipe? I would love to hear from you, leave me a comment below and give me a ⭐⭐⭐⭐⭐ rating. This will help me sustain Plant Based Folk.

Alternatively, did you happen to take a photo of your dairy free smoothie? Tag me @plantbasedfolk on Instagram to be featured via stories. If you love sharing your vegan food pics, join the PBF community group. If you’re into fast cooking vids, join me on Tiktok. 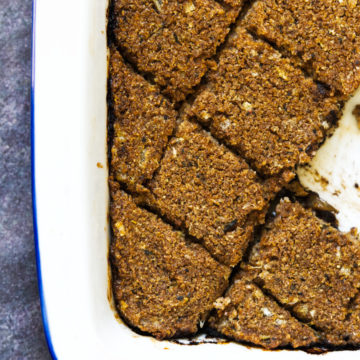 Serve this kibbeh with my Lebanese Rocca Salad. It's a simple salad made with arugula as the main leafy green.