This authentic Mujadara is an easy delicious Lebanese lentils and rice recipe topped with caramelized onions. The ingredients used are typically always kept in the pantry and are inexpensive. Mujadara hails from the Middle East as a signature dish.

Mujadara is a Levant meal of rice and lentils topped with a generous amount of caramelized onions.

This simple Lebanese lentils and rice recipe produces a lot of flavor and is the epitome of vegan Lebanese food, a flavorsome comfort food loved by kids and adults.

If you are ever in doubt about what to make that’s super tasty, high in protein and makes a wonderful leftover, think Lebanese mujadara.

How To Pronounce Mujadara

Different Levant countries pronounce it differently, it is also known as megadara (Egyptian), mejedera (Armenian), moujadarar, mujadarrah and a few other variations.

😋Why You’ll Love This Recipe

Notes on some of the ingredients, the full list of ingredients and quantities can be found in the recipe card below.

Brown Lentils – some people know this lentil as green lentils. Either way, it’s always best to use dry lentils over canned.

On the odd occasion, I’ve used the canned variety which is typically smaller in appearance and a darker shade of brown.

Canned lentils do not require to be par boiled as written below.

When using dry brown lentils, it’s best to wash them, sort them (if needed) and then soak them for about 30 minutes prior to using. This will quicken the cooking.

Rice – white rice is preferred, we prefer to use basmati as it cooks the quickest. My mum prefers to wash and soak her rice for about 10-15 minutes to rid of extra starch. I personally don’t do this step. Both work well.

If you do give brown rice a try, let me know in the comments below – I would say the taste would be different as there is a distinct difference between the two kinds of rice.

Onion – white or brown onions are best. You will need to cut the onions 2 ways;

Olive Oil – always opt for the best extra virgin olive oil, it really does make a difference in taste.

Salt – this is to taste

Onions divided - top is thinly sliced, used for topping on the lentils and rice and bottom is thinly diced (almost minced) and cooked within the rice and lentils.

🔪How to Make Mujadara?

Step 2 – In the same pot, using the same oil (with another optional 1 teaspoon olive oil fry the finely diced onion until lightly golden

Step 3 – Add lentils, and salt and submerge in water (covering lentils at least 1cm (⅓") above), cook on med-high heat until lentils are parboiled

Step 4 – Add rice and bring to a boil, reduce heat to low and allow to cook, stirring no more than three times.

To identify par boiled lentils, simply pick out a couple of lentils using your thumb and index finger, squeeze between the two and if the lentil has a soft outer and hard inner, then it is par boiled

As our family secret ingredient gives this recipe a boost in flavor, there is no need to add any spices, however, some do add cumin and or 7 spice.

Only use brown lentils (some call the green), any other color will result in a different outcome.

Be careful when caramelizing onions, toward the end they will brown fast and it's often a matter of seconds before they burn.

When cooking mujadara, the entire recipe is always cooked in one pot. No need to fuss about additional washing.

Get yourself a bottom-heavy pot, thin pots will burn the rice and may turn out mushy.

🥗What to Serve With Mujadara?

If you want to eat like a true Middle Eastern - Mujadara is typically served warm:

I personally love eating it with a side of freshly cut radish too.

How to store Mujaddara?

Once the mujadara has completely cooled down to room temperature, store it in an air-tight container in the fridge for up to 5 days. Mujaddara can also be frozen once cooked and cooled to room temperature, place portions into air-tight containers and place in the freezer for up to 3 months. Defrost/heat as required. Mujaddara makes a wonderful leftover.

Can I make mjadara oil-free?

Yes, although the flavor isn’t the same. For the caramelized onions, use a non-stick pan and water fry them until they have wilted and are somewhat brown (note - these will be nothing like the authentic caramelized onions) When cooking the lentils and rice, replace the oil with water.

If you're loving this vegan Lebanese mjadara recipe, then you will love some of my other ones too;

Batinjan Mahshi - how does rice stuffed into eggplant sound?

Lebanese Zaatar - the most coveted herb seasoning from the middle east which can be used in pasta, on bread, as a rub or in dressings. A must-have!

Did you enjoy making this vegan recipe? I would love to hear from you, leave me a comment below and give me a ⭐⭐⭐⭐⭐ rating. This will help me sustain Plant Based Folk.

Alternatively, did you happen to take a photo? Tag me @plantbasedfolk on Instagram to be featured via stories. 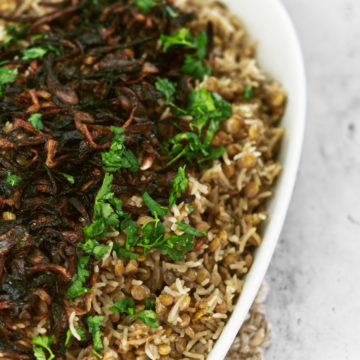 It's best to wash lentils in cold water and then soak for about 30 minutes prior to cooking Step 2 - you may require to add an additional teaspoon of olive oil if too much was taken out at step 1 Step 3 & 4 -  you may need to add additional water to ensure all contents is submerged in 1cm of water To identify par boiled lentils, simply pick out a couple of lentils using your thumb and index finger, squeeze between the two and if the lentil has a soft outer and hard inner, then it is par boiled Be careful when caramelizing onion, toward the end it will brown fast and it's often a matter of seconds before it burns This entire recipe is always cooked in one bottom heavy pot. No need to fuss about additional washing.  Do not over stir the rice as this will cause it to break apart and become mushy Don’t use quick cook microwave rice Serving suggestion will yield left overs