Let's make some golden baked vegan hash browns with sweet potato & potato that are addictive (who says no to potato?)

These vegan hash browns aren't so naughty; they are baked in the oven, each hash brown is crispy on the outside and tender on the inside.

When making this hash brown recipe choose potatoes and sweet potatoes that will be easy to handle when shredding.

When it comes to sweet potatoes, any colour will do, though I prefer orange as the colour is appealing when it's baked - looks more golden.

Step 9 - Bake in a preheated oven on 180 degrees Celsius (356 deg Fahrenheit) until golden.

If you don't mind the oil, you can fry these vegan hash browns

Use a mandolin to shred your potatoes to quicken the process, however you can use the good old handheld shredder

Season to your taste, don't be afraid to do a taste test

Serve these vegan hash browns with your favourite condiment 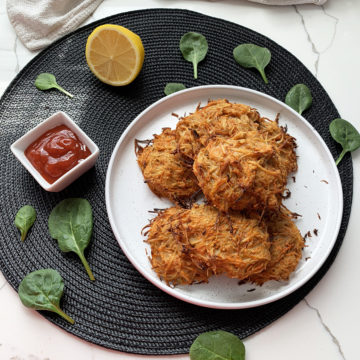