Lebanese spinach stew is hearty, warming, and delicious. Using minimal ingredients and can be made in around 30 minutes. Best served with Lebanese Rice.

Lebanese spinach stew is known in Arabic as sabanekh wa riz, which translates to spinach with rice.

Up until a few years ago, in my family, this dish would feature well-seasoned ground (mince) beef balls (which, as a kid, I would try and pack in as many meatballs into my bowl, they were so good!)

We would always eat this spinach stew with Lebanese vermicelli rice and a dollop of laban (which is plain yoghurt in Arabic) on the side.

The combination of the cold yoghurt with hot stew is wonderful. This is similar to how we eat bazella w riz which is stewed peas and carrot.

Nowadays I make vegan Lebanese spinach stew for half the family and the original meat version for the other half.

Aside from this recipe being requested on a weeknight, I also get asked to make Malfouf which is cabbage stuffed with vegetables and rice or Molokhia which is the ultimate Lebanese comfort food of braised jute mallow.

I also prefer to use fresh ingredients throughout the entire recipe, except for canned chickpeas (here's another Lebanese recipe (balela salad) with chickpeas in it).

With fresh spinach, I have the freedom to chop it how I please, I usually chop it into bite size pieces, even the stalks, giving it more texture.

No matter how you make this Lebanese spinach stew, it makes an ideal family meal as it’s filling and inexpensive.

I’ll explain in the recipe how to make both versions.

How to make Lebanese Spinach and rice

Spinach vs baby spinach - In this recipe I prefer to use spinach over baby spinach. It is earthier and overall has a stronger taste.

Fresh spinach when cooked will wilt and lose 50% of its volume, hence why a large amount of spinach is needed.

Making a big batch of sabanekh wa riz is great. This recipe keeps well in the fridge, for a few days in a snap-lock container. Simply reheat over a stove top or microwave.

In the Lebanese spinach and rice video I didn't fry off the garlic or coriander (cilantro) as I recently learned off my Chinese friend, they never fry their garlic off as it reduces the garlicky flavour. I don't mind it this way.

If using dried chickpeas, soak them overnight and then cook prior to placing them into stew.

If using canned chickpeas, keep the juice, this is called aquafaba and is used to make many delicious foods, such as my Lebanese inspired vegan meringue with rose water.

Use the stalks of the spinach too, just chop up small (at least into bite sized pieces)

In my immediate family we never make it with brown pine nuts and it tastes amazing, however if you are inclined, like many others, you can add the browned pine nuts on top as a garnish when serving.

It's best to use a heavy based pot* to avoid burning the contents when cooking, especially when browning. A thin based pot will burn.

The above photo shows the same image but with silverbeet (swiss chard) rather than spinach. The result is equally delish.

The spinach can be swapped out for silverbeet. Silverbeet features a lot in Lebanese cooking and is often interchangeable with spinach.

Although, this won't be a spinach stew any longer 🤔 If you like cooking with silverbeet, try my Lebanese Black Eyed Beans Vegan recipe

Another Lebanese spinach recipe is my delicious spinach fatayer (pies) 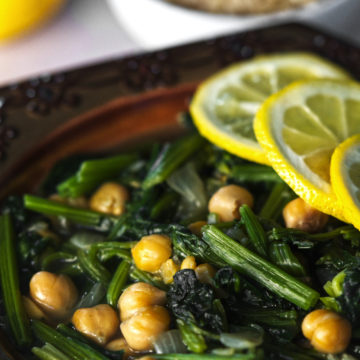