Batata harra or Lebanese spicy potatoes have been air-fried and tossed through coriander (cilantro), lemon, garlic, and chili. A highly popular dish in Lebanon and the Middle East.

What is Batata Harra?

Batata harra or Lebanese spicy potatoes is a naturally vegan dish consisting of fried potato pieces that have been tossed through cilantro (coriander), garlic, and chili.

The spiciness of this dish comes from the added chili which can be adjusted to suit.

Traditionally batata harra is deep-fried in oil, however, an air fryer has been used in this recipe, which yields amazing results as the deep-fried alternative.

If you do not have an air fryer, you can oven roast instead if you prefer to avoid deep frying.

However, this meal is commonly referred to as Lebanese spicy potatoes and has been called by a few other names including Lebanese potatoes, Arabic potatoes, Middle Eastern potatoes, coriander potatoes or cilantro potatoes, or additionally batata bi kizbara “potatoes in coriander” for those who tend to omit the chili.

😋Why You’ll Love This Recipe

Notes on some of the ingredients, the full list of ingredients and their measurements can be found in the recipe card below.

Potatoes should be fresh, peeled, and then cubed into 2½ cm (1") cubes. A good starchy potato such as Russet or Yukon Gold works well.

After peeling the potatoes place them into a bowl of water for at least 15 minutes, this will help expel excess starch and in turn create some crispiness when fried.

Cilantro, (coriander leaves AU) (cilantro in Arabic is “kiz-ba-rra”), should be fresh.

Use the leaves and soft stalks and finely chop up after washing and thoroughly drying. You will need 1 cup divided into 2 portions; 1 for air frying and the other for tossing the air-fried potatoes through at the end.

The coriander in batata harra is the hero in this dish (in my opinion).

Chilli can be used fresh or dried. The type of chili selected can be left up to you and your threshold for spiciness.

In this recipe, I have used dried bird’s eye chili, mainly because I have quite a bit in my pantry.

I will generally chop up a whole chili, seeds and all, to toss through these Lebanese spicy potatoes whilst air frying.

Fresh lemon juice is used to dress the batata once they have been air-fried. I do not recommend store-bought lemon juice.

Oil should be selected based on its high smoking point. I have used avocado oil (affiliate link), however, any neutral oil is okay.

Fresh garlic cloves are best to use in this recipe. You can either finely chop or crush the garlic.

🥔How to Make Batata Harra

Step 1 - Soak potatoes in cold water (after dicing) for 15 minutes. Thoroughly dry with a paper towel or tea towel.

Step 2 - In a bowl mix potato, oil, half the coriander (cilantro), chili, garlic, and salt. Make sure everything is evenly mixed together.

Step 3 - Transfer to an air fryer and fry on high for 15 minutes, then toss and fry for another 13-15 minutes, or until golden brown and cooked.

Step 4 - Place air-fried potatoes in the same mixing bowl as used in step 2 and add the remaining coriander (cilantro) and lemon juice. Toss all ingredients and adjust salt if required. Serve immediately.

Changing the size of the potato cubes will change the cooking time i.e., if larger cubes are used, you may need to air fry for longer.

Ensuring that all ingredients are dry before cooking is vital, otherwise, the potatoes will not crisp up in the air fryer.

Air Fryer’s differ in makes & models and have different settings.

I recommend keeping an eye out on the batata when you first make this recipe. This is a similar air fryer (affiliate link) to what I am using.

I like to toss my Lebanese spicy potatoes in the lemon juice (step 4) just before serving, this will help keep them crisp for longer.

Air fryer batata harra can be turned into batata b kizbara which translates to potatoes in coriander (cilantro). You can do this by simply removing the chili altogether from the recipe.

The amount of garlic, chili, lemon, and coriander (cilantro) can be adjusted to suit your taste.

Adding all the coriander (cilantro) to the Arabic potatoes before air-frying is also a good option, I just love having the contrast of both the fried and fresh herb, I find it more aromatic.

Double frying is the original method used in Lebanon, this includes deep-frying plain potatoes first, then shallow frying with the other ingredients.

Roasting the potatoes is also a good option, simply preheat your oven to 200C (390F) and roast (tossed in a little amount of oil and half the amount of cilantro) until crispy golden brown, then toss through the remaining ingredients.

Parboiling is the method that includes boiling the potatoes (about 10 minutes) until they have just started to soften (not cooked) and then either roasting, air frying, or shallow pan-frying with half of the other ingredients and then tossing the remaining ingredients.

Can I store batata harra?

Whilst it is advisable to enjoy batata harra immediately, they can be stored in an air-tight container in the fridge for a few days. To heat up, add them back into the air fryer, oven or pan until crispy again, though they will not be like when freshly made.

Can I make Lebanese spicy potatoes ahead of time?

It is advisable to prepare the sauce ahead of time rather than pre-cooking the potatoes. As the potatoes are tossed in a sauce, they will soften very quickly and will lose their crispiness.

What is coriander in Arabic?

The Arabic word for coriander (cilantro) is “kizbarra” pronounced as kiz-ba-rra.

What is a mezze?

Mezze is a selection of small differing dishes that are enjoyed in one sitting. These dishes can be a combination of hot and cold dishes.

Batata harra is usually featured as part of a mezze, side or part of a wrap. Try them with;

Vegan Shawarma - this is the best vegan shawarma recipe

Easy made from scratch falafel

Or try this Patatas Bravas recipe from Europe dishes.

Did you enjoy making air fryer batata harra (Lebanese spicy potatoes)? I would love to hear from you, leave me a comment below and give me a rating. This will help me sustain Plant Based Folk.

Alternatively, did you happen to take a photo of your food? Tag me @plantbasedfolk on Instagram to be featured via stories. If you love sharing your vegan food pics, join the PBF community group. If you’re into fast cooking vids, join me on Tiktok. 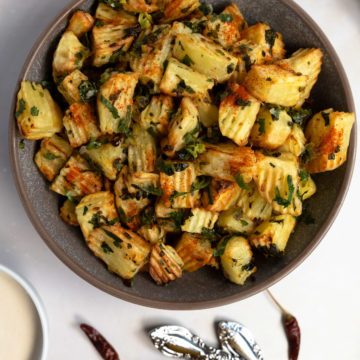 Prevent your screen from going dark

Cooking times may vary if the size of the potato cubes are different All ingredients should be thoroughly dry prior to cooking - this will ensure potatoes crisp up Air Fryer’s differ in makes & models and have different settings, I recommend keeping a watch whilst cooking the potatoes Toss the Lebanese spicy potatoes in the lemon juice (step 4) right before serving, as this will soften the potatoes. Try this recipe with; Arnabeet mekle, Lebanese fried cauliflower Vegan Shawarma - this is the best vegan shawarma recipe Tabouli, the famous Lebanese parsley salad. Easy made from scratch falafel  Baba Ghanouj the famous Middle Eastern eggplant dip